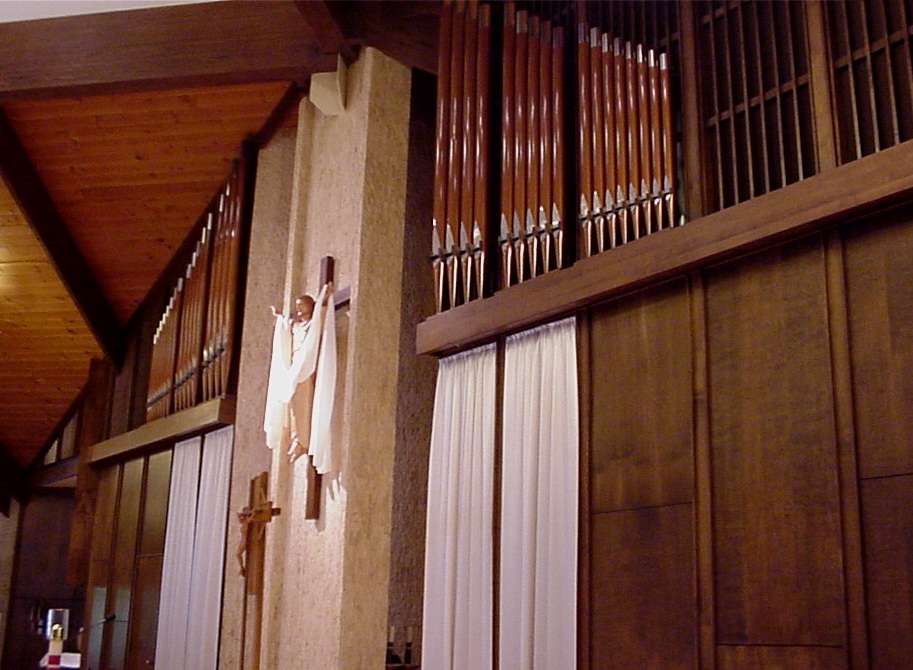 In 1965 Casavant Frères of St. Hyacinthe, Quebec, built the organ for Our Lady Gate of Heaven Church in Detroit. It was installed in the rear balcony of the church. After only one or two years, the church was renovated and the organ was moved to the front. When that church was closed the organ became available, and we recommended it for installation at St. Irenaeus. It replaces a much smaller organ that had been in St. Irenaeus' original church building. That organ had not been very successful in the new building. This was due partly to its small size, and to the extreme depth of the organ chambers. So we knew that the chambers would need to be improved for the Casavant installation. Plans for the new chamber partitions were worked out in conjunction with Stephen Auger + Associates Architects. The walls were designed for maximum density and sound reflection.
This organ comes from a time in which the neo-classic ideal was being reborn. Organs from the period are characterized by low wind pressures, smaller scales, and rich harmonic development. There also tends to be more speech transient noise, which needs to be adjusted for the acoustics of the room. In making plans for moving the organ, we recommended a few modest additions to the organ. Among these were the Nasard and Tierce mutation stops, which add color to solo combinations. Two reed stops were added, the Great Trumpet and the Swell Hautbois, which will enhance the versatility of the organ. The chimes had been prepared for, but we were able to install them due to a generous gift from an anonymous donor. The major effort of the rebuild, besides making the organ fit and work in the new space, was the addition of a multiplex control system. This system includes a multi-level combination action, and has provision for possible Midi functions and playback features. We replaced the 56-note keyboards with 61-note models, and the console was stripped and refinished. The facade pipes, which compose the bass pipes of the Great and Pedal Principal stops, were repaired and painted a copper color by Art Malburg of Allenton Collision in Capac.
Pipe organ projects are very labor-intensive; we spent more than 2300 hours on this project, not including dismantling the organ in Detroit. Several people were involved over the course of the work: Edwin Judd, Michael O'Neill, Matthew Simpson, David Wigton. Richard Swanson was involved in the voicing and tonal finishing. Fred Oyster of Louisville, Ohio made and voiced the new reeds. A.R. Schopp's Sons of Alliance, Ohio made the facade extension pipes. The multiplex system is from Matters, Inc. of Hermosa, South Dakota. For most projects, we choose to set up the organ in our shop. However, because of the proximity of this project we decided to work mostly on site. This may not have been a good idea-- we ended up making over 90 round-trips from Dryden to Rochester Hills!
It was gratifying to work with Cliff Wilkins and the Building Committee. We thank the people of St. Irenaeus for entrusting this project to us, and hope it will serve the liturgy well for many years to come.
Back to Opus List