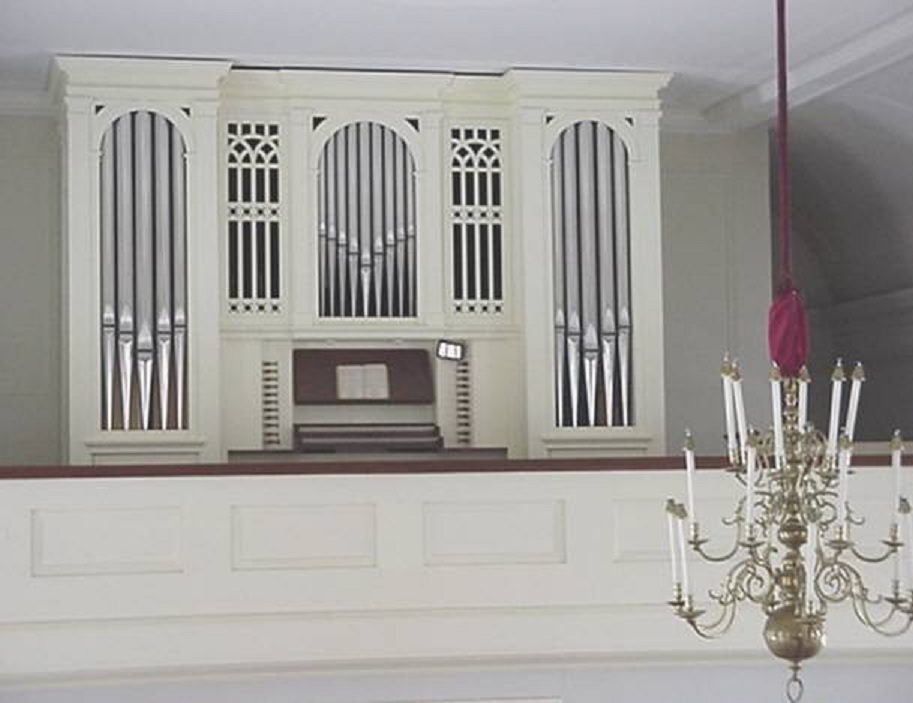 Henry Ford built the Martha-Mary chapel in Greenfield Village in 1929. The first of six such chapels, it was named after Mr. Ford's mother and his mother-in-law. The chapels were exact copies (at 1/3 the size) of the First Congregational Church in Bradford, MA. That building, influenced by designs of Christopher Wren, was designed in 1848 by Boston architect Richard Bond.
Henry Ford had the Aeolian company of New York install their Opus 744 in 1929. It had three manuals and 20 ranks. The organ was installed in basement chambers with tone openings facing both sides of the chancel. An Echo division was in an enclosure in the rear balcony. The chapel, though non-denominational, was used for daily exercises by the Greenfield Village school for years. Henry Ford is said to have spent many a morning observing the children's services from his pew in the balcony. In recent years the chapel is used mainly for weddings, of which more than 100 are performed each year.
The basement location proved to be fatal for the organ. The continual dampness there seems to have taken its toll on the organ, and it was replaced by an electronic instrument sometime in the 1980's. Rather than attempt to resurrect the Aeolian, we recommended that a small tracker organ be designed for the balcony. This is what you would expect to find in a small New England chapel, and it would be perfectly adequate for playing the wedding music required of it.
We removed the Echo division of the Aeolian, whose pipes had been damaged by the electronic installers, and installed the new organ in its place. David Graebe, noted British organ case designer, is responsible for the design of the new case. It is meant to be reminiscent of mid-19th century cases of the Boston builders, while the art deco access panels echo the chancel grilles downstairs
We designed the organ to be as flexible as possible, given its fairly small size. Its most unique feature is the use of "either/or" stops, which are available on one manual or the other, but not both at the same time. All but the 8' Principal, the 8' Celeste and the Pedal Bourdon are of this type. Everything but the 8' Principal and the Pedal Bourdon is in the swell box.
The casework is built of yellow poplar which we quarter-sawed and dried ourselves. The key and stop action are all mechanical. The drawknobs are angled toward the player. Manual naturals are bone, sharps are blackwood. Pedal naturals are maple, sharps are plastic.
Tonal finishing of the organ was done by Richard Swanson of Grand Ledge, Michigan. Fred DeHaven, the consultant, played a dedication recital upon the organ's completion.
Back to Opus List