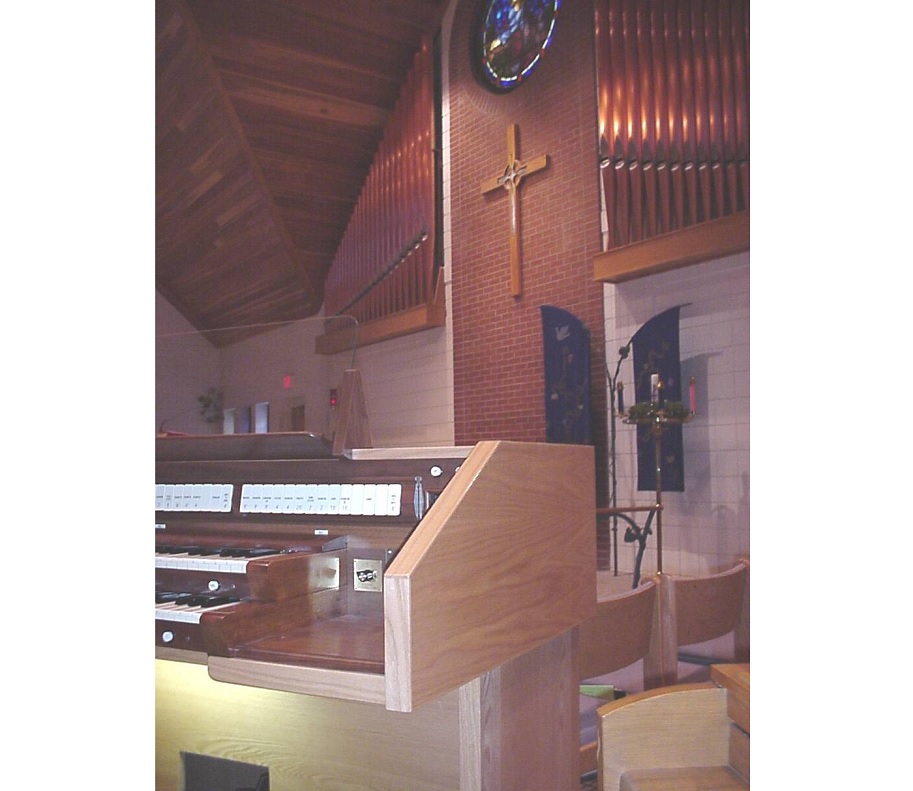 The organ at St. Philip's started out life as a "Double Artiste" model from the M.P. Moller Company of Hagerstown, Maryland. This was a unit organ of six ranks, with three ranks in each of two eight-foot-square "speaker cabinets." In the 1970's it was enlarged by several ranks and installed in a chamber. The pipe additions of that rebuild were of good quality, but not scaled and voiced to maximize their potential. The main improvement was that the Principal chorus, the "backbone" of the organ, became a basically "straight" design-- no pipes in the chorus had to do double-duty.
Our main concerns as we moved the organ and re-installed it at St. Philip's were to re-scale and re-voice the existing pipework to get the most out of it. We also added a facade to the organ, with pipes of brushed and lacquered copper . The pipes on the left are from the bottom two octaves of the Great Principal, those on the right from the Pedal Principal. They and the new pipes from the Swell 16' Gedackt were custom-made by Organ Supply Industries of Erie, Pennsylvania.
Our work also included replacing the old electropneumatic switching with a solid state multiplex system. This system includes a multi-level combination action, and has provision for possible Midi functions such as digital voices and playback features. We replaced all old cotton-covered wire with vinyl-coated cable to meet current electrical codes. We built a new console for the organ, which is red oak with walnut trim.
Pipe organ projects are very labor-intensive. This one was no exception-- about 1350 hours were spent, not including the dismantling and moving. Several people were involved over the course of the work: James Bebo, racking, wiring and installation; Jeff Perry, console, racking; Thomas Schuster, dismantling, pipe racking; Anne Marie, Joel and Elizabeth Wigton, dismantling; David Wigton, voicing, installation, tuning. Richard Swanson of Grand Ledge, Michigan supervised the tonal finishing, and designed the handsome facade pipe display.
Back to Opus List