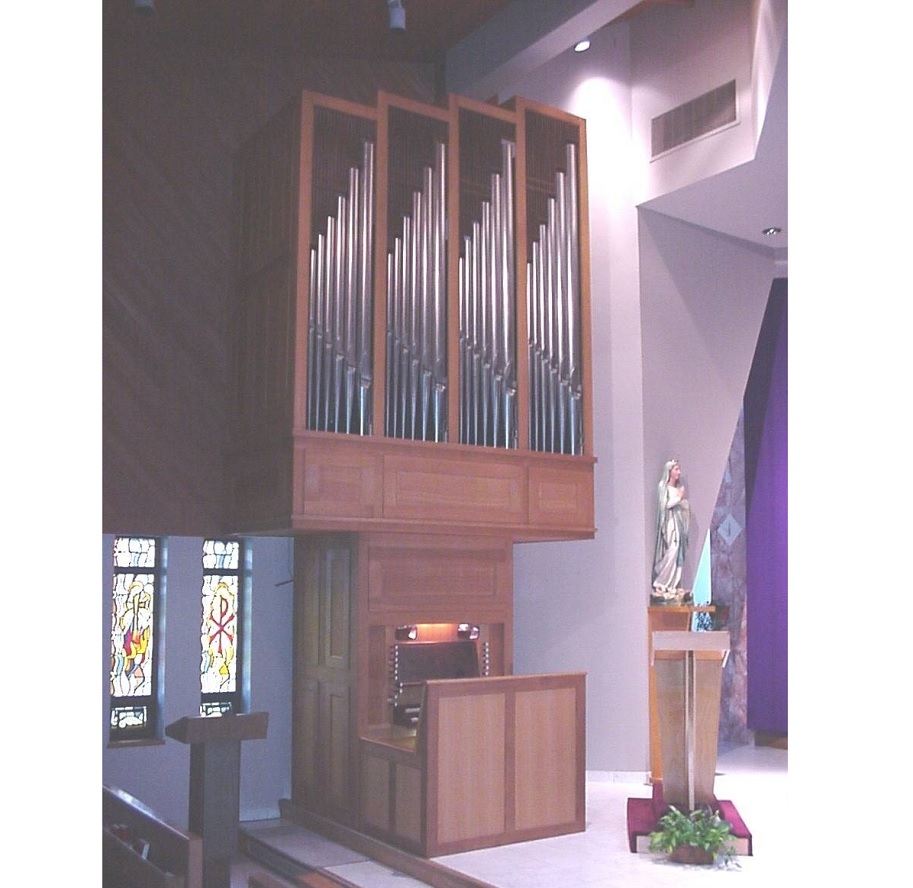 We designed the new organ for Sts. Cyril & Methodius primarily to enhance worship in the church, and only secondarily for concert use. The pastor was very open to placing the organ as near to the room's main axis as possible, for the best sound dispersion.
The organ case is free-standing. It has a narrow pedestal, taking up as little floor space as possible. The upper portion is arranged in four flats of pipes that follow the slope of the ceiling, the top of the tallest flat being 24 feet off the floor. The case, although contemporary in style, follows classical principles of organ construction. There are no internal supports-- the casework members themselves support the windchest and pipes.
The case is made of quarter-sawn and rift-sawn white oak. Joinery is pegged mortise and tenon. The pipeshades and console trim are walnut WPO milled and kiln-dried the majority of the lumber.
Both key action and stop action are mechanical. No electricity is used except for the blower, tremulant and lighting. Key action is of the suspended type, a very sensitive action especially well-known in classical French organs. The drawknobs are arranged in columns at a 15-degree angle, for the organist's convenience.
The tonal design was done in such a way as to make the organ as versatile as possible. Both manual divisions are placed on one windchest, which make sharing some stops possible. Everything is under expression except the 8' Principal. Three of the stops are "either/or," which means they may be played on either manual keyboard, but not both at the same time. The Pedal Bourdon, placed behind the organ in a shallow chamber, is playable at both 16' and 8' pitches.
We spend almost 3,000 hours building the organ. David K. Wigton did the design, some voicing and much construction. However, many other people were involved in the building and installation: Jeffrey Perry, casework, chests; Thomas Schuster, racking, installation; Linda Dzuris, racking. Also involved were Corey Drayer; Larry Monahan; Margaret Wigton; Anne Marie, Joel and Elizabeth Wigton; Kenneth and Marie Wigton. Claus and Sharon Canell of Erie, PA built most of the metal pipes; American Organ Supply of Milwaukee built the wooden ones. Richard Swanson of Grand Ledge, MI was responsible for most of the voicing and tonal finishing. Dr. Marilyn Mason, of the University of Michigan, was the consultant for the project-- her suggestions and encouragement were a great help.
Back to Opus List