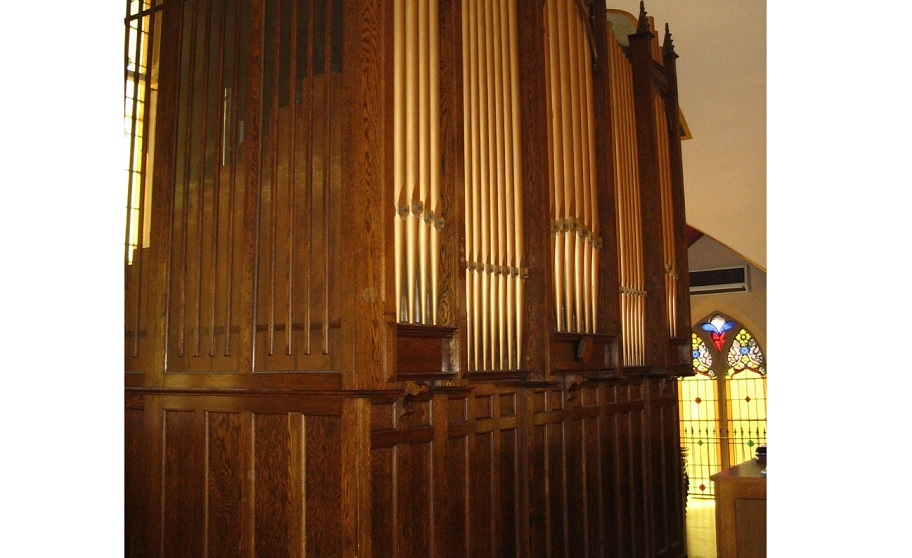 St. Patrick's is the oldest Catholic parish in Wyandotte. The Wyandotte Rolling Mills (later the Eureka Iron Works) were started in 1856; soon after, the Wyandotte Shipbulding Company opened. The French, German and Irish workers needed a church closer than the one in Ecorse. Originally known as St. Charles Borromeo, this church was established in 1857. The first building was a simple frame one, but work began in 1873 on a new brick church. However, hardship befell the young congregation, as high winds knocked down one of the walls, followed by the economic "panic" of the 1870s which put everyone out of work. By 1883 work on the church resumed, and the country Gothic edifice, reminiscent of those in Ireland, was completed. By 1888 the makeup of the parish was primarily Irish, and the congregation petitioned the bishop to change the church's name to St. Patrick.
St. Patrick's 1857 furnishings included an organ, which was replaced in 1901 by another organ. These, however, were almost certainly reed organs. The first pipe organ was installed in 1929, when Fr. Peter Ryan was pastor. It was Votteler-Holtkamp-Sparling's Job #1518, a fourteen-rank organ costing $6500. Apparently the balcony was rebuilt for its installation (although a new front had been added to the church in 1915, which may have included the balcony). In 1964 the J.A.Hebert Co., Casavant regional representatives, rebuilt the organ, installing two new pitman chests, removing six of the Votteler stops, and adding five new stops from Casavant. They also re-leathered the façade and pedal chests, and installed a new console.
By 1999 the leather was starting to show signs of wear again, and the 1964 combination-action was unreliable. Another ongoing deficiency was the Swell division, which was not very useful. Organist Michael Semaan formed an organ committee that studied the alternatives, and asked us for a proposal. We looked at the problems, and proposed making a better use of space by putting the Swell behind the Great. The committee chose the tracker design option, which would be feasible if we used some carefully selected re-cycled parts.
We had two slider chests in storage from M.P. Möller #894, which had been in the Milford Methodist Church (now the Masonic Temple). These were the right size for the revised stoplist. We re-tabled these chests, and added electric stop-actions. We located a console chassis from a Schlicker organ built for Wayne State College, in Wayne, Nebraska. We fitted this chassis to the 1964 console, and fabricated the key action to travel under the floor from console to chests. We re-leathered the pedal and façade chests, and provided a solid state switching system, as well as a solid state combination action. We installed a new quiet blower inside the organ case, installed schwimmer wind regulators in the chests and revised the winding system.
The overall tonal concept was to retain the best parts of the original organ, as well as the revisions done in 1964. We moved the Trumpet to the Great on a separate chest, so that a 16' extension for the Pedal could be prepared for. We filled out the Swell by adding a 4' Fugara (a small principal) to go with the Geigen, added a pair of strings as well as some mutation stops for variety. We retained the Ludwigtone, which is a stop unique to Holtkamp organs. Named for an old monk known as Brother Ludwig, this register was considered perfect for the accompaniment of chant. That usage could be debated, but this stop, with its double-sided wooden pipes purposely mis-tuned, does have an ethereal, shimmering quality.
Organ building projects are very labor-intensive. Wigton Pipe Organs employees spent almost 2800 hours on this rebuild. Mainly involved in the work were: David Wigton, Daniel Wigton, Jared Grabill, Joel and Elizabeth Wigton. Scott Smith of Lansing did the re-leathering. Richard Swanson of Grand Ledge lent his considerable talents to some of the voicing, and to the tonal finishing. We wish to thank the people of St. Patrick, Fr. Ray Lewandowski, and organists Michael Semaan and Kim Kilburn, for their support of this project. We especially want to thank the major donor, Edmund Bott, M.D., without whose generous gift this project may not have come to fruition.
Back to Opus List