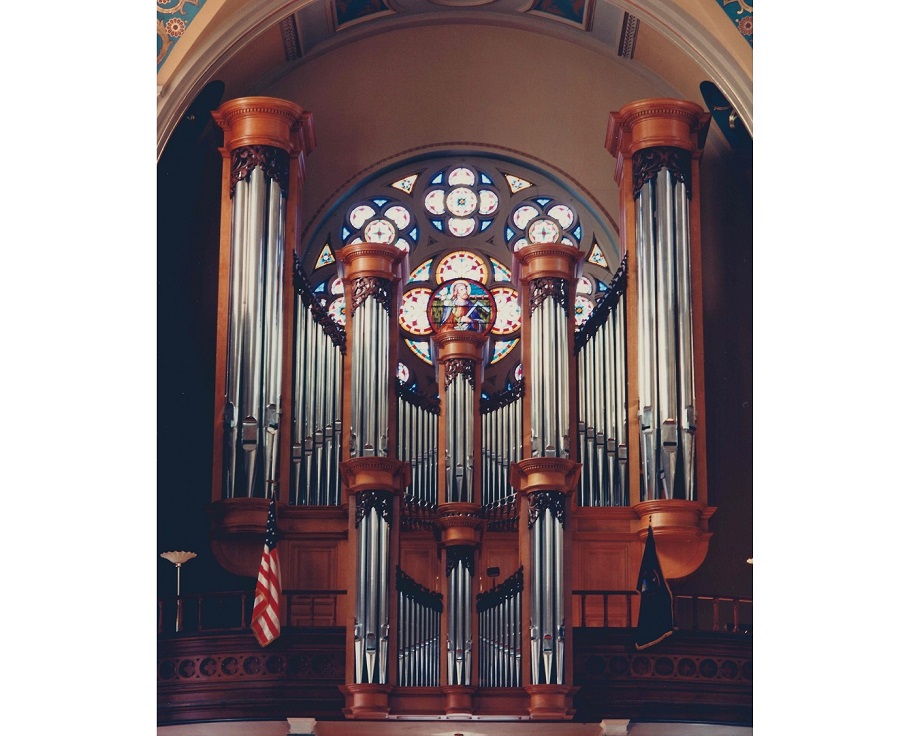 Old St. Mary's parish was founded in 1834. The current building was designed by parishioner Peter Dederichs and completed in 1885. The previous building's organ was used until it was replaced by an instrument by Kilgen, of St Louis, MO. This was a large three-manual, which served well until the 1970s. At that time it was rebuilt, using what turned out to be an unsuccessful replacement for traditional pouch leather. The new actions used a polyurethane membrane, and they began failing within a few short years. By the time we surveyed the organ in the 1983 or so, you needed to couple everything together to get most notes on the Great.
We briefly considered a rebuild using some of the existing pipework, but it soon appeared that it would be one of those "oil and water" mixes. We proposed a totally new instrument with mechanical action, which would guarantee a long life.
The church desired to leave the St. Joseph window at least somewhat exposed, as the Kilgen façade had done. We decided that a French-style case with the smallest tower in the center would frame the window nicely. After an exhaustive study of French organ cases, especially the late 18th-century cases by Riepp at Dole and Dijon, we submitted a design that seemed to be at home in the large Romanesque room.
We modified the gallery rail and built the Positif first, along with the terraced console. After a year so into the project, the Positif was already showing itself to be an admirable division for leading congregational singing, although it was a little unusual to have as the only pedal stop at that time the 32' Contre Bourdon!
The main case, which stands 34 feet tall above the gallery floor, houses the Swell division in the center, flanked by the divided Great division. Then the divided Pedal division is in the large outer towers. The tin Trompette en chamade is mounted below the Swell. The center tower in the main case is exactly the same size as the outer Positif towers, visually tying the two cases together.
This organ is responsible for our venture into milling our own lumber. At that time, it was more difficult to find quartersawn white oak in large matched sizes. This traditional casework with wide panels made us look into other options for obtaining quality lumber. We felled all of the trees, and with the use of our two-man chainsaw mill and portable bandmills, produced all the lumber for this organ (and several subsequent ones). The beautiful walnut pipeshades were carved by the Georg Keilhofer studio of Frankenmuth, Michigan.
The pipework was built to our specifications by shops in Germany and England. The key action is all mechanical. The stop action for the Positif is electric, while the stop actions in the main case are electropneumatic.
Back to Opus List